After my Ph.D. exam in Berkeley, I took the summer as a reward and took off with Suzanne and David to Europe. It was a couple of months in late July/August/September, and I had, as I remember, $300 for the whole thing (and came back with change).

I landed in Paris, stayed a couple of days on the left bank in the shadow of Notre Dame, at a small hotel called L’Hotel Normandie. It had been recommended by a friend, and the owner was charming, though she spoke very little English.

In fact, those days English had not quite taken over the world the way it has now, and my own French was marginal at best. It was enough, however, to put me ahead of the other student passengers in the flying toilet that we took from California to Orly. Several of them attached themselves to me when they realized it was possible I might make myself understood, and we all rode together to Les Invalides and thence to the bus that went up the Boulevard St. Michel. I was in fact able to ask if the bus went to the areas everyone wanted, though the flood of French that came back from the ticket taker (in those days they rode in the back) went straight over my head. Apparently my Loire Valley pronunciation and phrasing made people think I was better at it than I was. But I have been grateful that I have been able to struggle through with it. I got to the hotel fine, and settled into a room with private bath for the princely sum of $4 a night.

After a few days, I took the overnight train to Rome where I met up with the Suzanne and David.

Rome was a real treat in those days, I think. There was still plenty of driving allowed within the city, so we had some interesting taxi rides. Suzanne was adventurous and got us to places I wouldn’t have thought of. One exceptionally charming evening we spent at the Baths of Caracalla, which was a stage for large performances. We were treated to a very large performance of Aida, complete with a chariot drawn by four horses. Another afternoon was spent at a chamber concert outside–simply gorgeous. But mostly we walked all over the place. We had one friend–David’s acquaintance, as I remember, who had a dark blue Alfa Romeo sedan that had formerly belonged to a finance minister. He explained that he could park anywhere he wanted because the police would never mess with the cars of ministers and they were always dark blue Alfas. He took us to interesting parts of Rome and out the Appian Way to have a lunch  in a restaurant on the Roca di Papa.

The restaurant was on one side of the hill, and the tables were on the other, hanging over the Tiber Valley. Great view, great food. Great weather. We also wandered at night near downtown where all the restaurants had extended into the streets. Since I’d never seen that before, it was a real eye opener about what real relaxation was. It also explains why Italians don’t have huge apartments–their lives are (or at least, then, were) outside, in the community. Too bad we don’t have that here–though Asheville may be getting there.

From Rome, we took the train to Assisi, which turned out to be a favorite. It was much sleepier then, and on the trip we ended up in a compartment with some nuns, who got out their bag lunch, slicing tomatoes, bread, and sausage. Communication was at zero, since we had no Italian and they had no English, but still amusing. Lots of nodding and smiling. Since Assisi is a hill town, we had to take a bus from the train station up to the town, and were approached by a woman of a certain age who managed to get us to understand that she had a room to let. I believe it was at the enormous cost of $1 a night (about 13,000 lira at the time, as I remember). We took it, though it was as basic as you can get, and the bathtub had an iron stain and only a trickle of water (cold). We didn’t care.

It’s hard to remember all these years later exactly where we went when, but I do know that after Assisi, we went on to Siena and Florence, then Suzanne and I took the train to Pisa (which we did not like) and then on to southern France, where we were to meet David, John Kalamaris and another friend who were staying at a small villa in the village of Roquebrune-sur-Argens. Getting there turned out to be non-trivial, as we were traveling on a the weekend and it was the middle of August. If you don’t know, that is when la toute France goes south for vacation.

We arrived in Nice along with several hundred thousand Frenchmen and women looking for a good time, and had to search long and hard for a hotel room. The concierge enlightened us about what was going on, and we spent a pleasant day on the rocky beach. Then next day (Sunday) headed for Roquebrune. We had to go by way of Frejus, and there was no bus from there to Roquebrune, so we taxied. Only to find that the entire crowd was out.

We left a note and wandered back down to the village, and searched for a room, since we did not know when they’d be back. Ended up taking the room of the owner of the Algerian hotel in town, where John found us gnawing our way through a wretched dinner, and took us up to the chateau for a decent dinner. 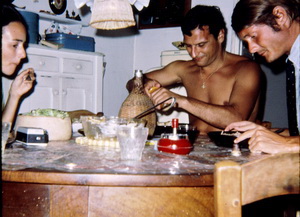 We stayed a pleasant week going around the Riviera in a clunky car we actually bought for the equivalent of 30 bucks. 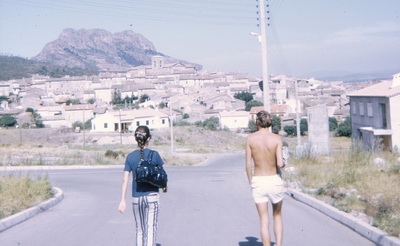 Here David and Suzanne head into the village, with the brown rock for which the town was named in the background. We also beached in at St. Tropez: 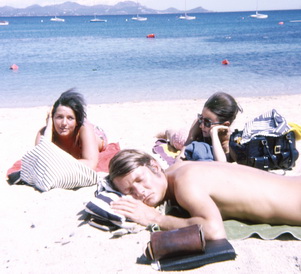 It’s at this point that things get iffy as far as memory goes. We all went to Paris, where Suzanne charmed the French with her Texas-based accent. But she got us around far better than I ever would have. Then she and I went to London, though I have no real idea how. From there we took that ferry from London to Belgium and visited Bruges and then on to Amsterdam.

We enjoyed Amsterdam and I was pleasantly surprised to discover that the Dutch thought I was Dutch. In general, folks in Holland speak perfect English, and they would always head straight for me and start talking in Dutch. I still can’t figure out why they would do that, but my sister says the same thing happened to her there. So we must have some Dutch heritage, which actually seems likely given how little we know of that side of the family. We saw the main things in Amsterdam, including the red light district, the Rembrandts in the Rijksmuseum, the Van Goghs, etc. We also sampled, to our immense delight, the rijsteufel (rice table) that the Indonesian population had brought to Amsterdam. Never had it anywhere else, and boy is it good–this I clearly remember even after almost 50 years.

From Amsterdam I flew back to London alone, since my plane was to leave from there. I spent a rather wet and uncomfortable week there, since it was September and raining. But I made it home with enough left of my original $300 to fly from Los Angeles to San Francisco, where some nice people had mercy on me and gave me a ride from the airport back to the apartment building in Berkeley.