Owen and I had moved in together the year before, and I was working full time at the Florida Times-Union. We both wanted to travel, and he had some friends who were travel agents and said they were planning to go to Oktoberfest in Munich. Would we like to go with them? So we said yes, figuring they could help a couple novices who spoke no German (well, I had a semester of it to pass a language exam at Berkeley, but that’s hardly enough). Naturally, after we had made our arrangements, they backed out. We were to fly into Luxembourg and pick up a car.

We could have gone anywhere in Europe, but for some reason stuck to Germany. Although we knew that it was the least like country to be compatible with us, I’m still glad we did it. This, of course, was before the reunification of Germany, so we saw only the west.

We took Air Bahamas, which required a stop in Nassau before getting on the plane for Germany. It was another student mob flight, but we didn’t much care, since it was a great bargain. And some time on the beach in the Bahamas wasn’t all that bad.

Anyway, after landing in Luxembourg and picking up our little red Ford, we headed to the Moselle valley, stopping first in Trier. We were successful in finding a room, but left because the bath was down the hall and Owen couldn’t deal with that. It was also kind of ugly in the rain. We ended up in a small bar/restaurant with rooms, had dinner and watched a James Cagney movie dubbed in German.

Then took off up the road along the Moselle. The thing about the pictures is, first, we had a better camera by far than I did ten years earlier, and we took more pictures. I had decided on slides, so these are converted from those, but slides do give you better color. But since we didn’t have the advantage of digital, which keeps the photos in order, I’m not sure if I did these correctly.

Anyway, we stopped in the town of Cochem where we toured the castle and met some very nice Dutch folks who translated the tour guide’s spiel for us.

We were following the Michelin guide, so we went on up the Moselle and stopped at Burg Eltz.

From there we went up to the Rhine, and stayed in a castle overlooking the river. We discovered a guide to castle hotels, and from then on we made sure to stay in several (if we could afford it) wherever we went. Usually we would alternate between small inexpensive places to stay and the splurge on one of these. I remember dining in one where we had poached fresh trout. Since we were “residents” of the hotel, we ate in the special dining room and were served by the hostess, who neatly boned the trout at the table. I remarked that she did that very well, and she breezily responded with a wave of her hand, “It’s my chob.” I think it was a kind of put-down, as if anyone should know that she knew her job and compliments were superfluous.

On the Rhine, we saw the little castle in the river the levied customs charges,

and then on down to Heidelberg. There, the new wine festival was in full cry,

and we really enjoyed it–not to mention that the weather was absolutely perfect.

One of the amusing things that happened was Owen’s usual habit of asking where people are from. The Zonta club was selling stuff, and since they were English speaking he asked if they knew his South Carolina natives–and sure enough, one of the women did. Small world. So we wandered the town, sampled the food and wine, looked at the street displays, and walked up to the castle. Lots of walking, and generally a perfect day. We remember Heidelberg as one of the great stops of this trip.

From Heidelberg we headed down toward Baden-Baden.

We looped down into Switzerland at Lake Constance, mostly just to say we had been to another country.

We stayed in a little inn that was very Swiss, and toured around Lake Constance to the part of Germany where a friend of ours had recommended a hotel. It turned out to be the perfect place, near the Zugspitze. From there we toured the famous Bavarian sites: Neuschwanstein, and Ludwig’s “small” vacation palace, the mountains.

The little hotel sat at the foot of the Zugspitze, We took the cable car to the top. One girl in her twenties who was riding with her father was terrified and buried her head in his coat. Owen couldn’t resist making remarks about the car seemed about to drop. At the top, the sun was really warm and we enjoyed just sitting. 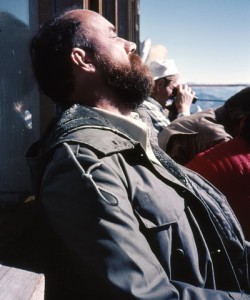 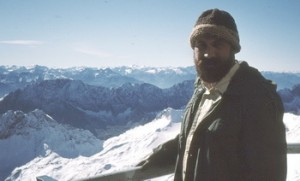 And we walked a lot around the countryside in those foothills. 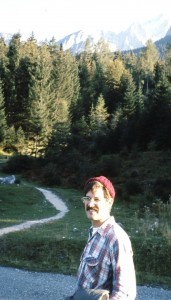 Then we went to Munich. We found Oktoberfest not to be worth the trip, but stayed for a few days before taking our new Dutch acquaintances up on an invitation to visit them. So we took off across Germany without any real idea of how far it was, arriving about 11 at night. They were gracious about it, to say the least, and took us all about the town. They had thought we would be staying a week, but we only had a couple days before heading across Belgium back to the airport in Luxembourg. Altogether, a very satisfying first shared trip to Europe.